We had gotten the last of the rotted ceiling section out, and now we needed to find a board to replace it. We needed an 8′ x 4′ x 3/8″ sheet of plywood for the new board, a nice standard size. One of our uncles was in the barn working on a truck in the next bay over, so we asked the best place to go to buy the sheet. He looked around for a minute and pointed to a pile of boards a few feet away from us. “One of those should do, they’re the right size.” Sure enough, there was a huge stack of Lauan that was nearly identical to the piece we had just removed, minus the decay. As we would learn many times during this project, everything we needed was in the barn.

The original board had been installed as one single piece, with the front streetside corner cut out to allow for the refrigerator vent and a notch cut out for an electrical line. We couldn’t squeeze the new one into place as a single unit, so we decided to cut it into thirds and slide each piece into place– first the streetside, then the curbside, and finally the center. With the help of our uncle, we had the board cut and ready in minutes. 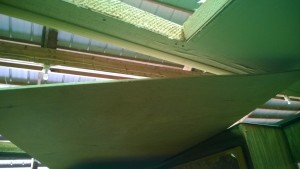 Trying to wedge the ceiling board in place. You can see the plastic groove where this board meets the central ceiling piece.

We bent the first board to fit into the plastic tracks and with a lot of grunting, slipped it into the grooves. Huzzah! But when we tried to slide it sideways into place, it wouldn’t budge. We tried smacking it with the heels of our hands, then hitting it with a rubber mallet, then butting a scrap board against it and whacking it with a bigger hammer, but it barely inched along.

We brainstormed for a few minutes and decided to pull the board out and lubricate the ends with a bar of soap. After grabbing a bar and applying it to the edges, we managed to pop the board back into place. 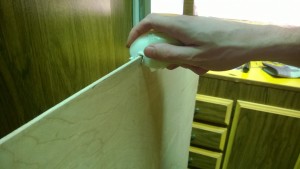 We were very happy to see that the board slid with much less force, and we banged the first board into place.

The second board also went in without too much effort, and we just had the center board to get in.

This piece slid into the plastic grooves on three sides.

Two out of three in place. You can see the large cutout in the first piece for the refrigerator vent.

We had the thickness of the sawblade as leeway between the boards, and after we strained to bend the final one in place, we slid the other two to sit as close to it as possible so there wouldn’t be a visible gap. Finishing nails every few inches held the Lauan to the thick pine ceiling beams. 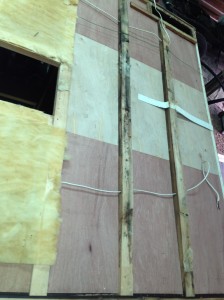 That’s a much sturdier looking ceiling.

We couldn’t believe that we had replaced the rotten board so quickly, but only about an hour after tearing out the bad one, we had the replacement board installed. Maybe this wasn’t such an impossible project after all! Ha, ha, ha. 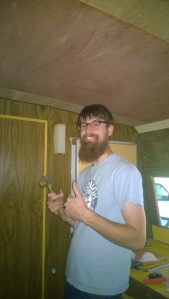